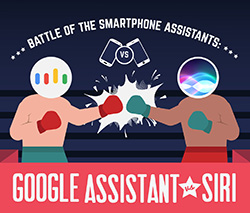 Siri is the go-to personal assistant Apple iOS users were proud to have and rely on. It nearly had no competition in the world of smartphones with its speed, clarity and accuracy until Google Assistant entered the big picture and turned the tables.

On first glance, Siri and Google Assistant are very much alike. They do the same things from setting reminders, to accessing apps and answering random questions. They respond with similar speeds, only with a few milliseconds apart. They both start up pretty fast too and could be monitored by speaking to them directly. This makes the battle highly competitive, and very hard to give away a verdict.

But at a closer look, we were able to detect many substantial differences between these two major personal assistants to have ever hit the market. Google has managed to develop its assistant much friendlier and chattier than Siri. Overall, it scores high and is expected to make its way into almost every android smartphone in the future.

Check out the infographic below for further details on this battle between Siri and Google Assistant. It will help you decide which will suit your phone the most, though you really have a limited choice with Siri as it won’t see a market other than iOS.